The Power of Soft Influence

A student at Queen’s University in Belfast asked me a question that caused me to articulate something I have only been mulling over for a while.  In a way, it’s a simple one:  “What can corporations do to help in the push to empower women?”

And, of course, there are many answers, such as “employ more women” or “pay women equally.”  In the context of the moment, we were focused on poverty, so the obvious answer would have been something about philanthropy or corporate social responsibility.

Instead, I said (without really expecting to say it) something like:  “I think corporations underestimate their ability to effect change in this domain through softer forms of influence, rather than only through formal programs. I think governments in developing countries are often unfriendly to women and that they are also often tired of being preached at or pressured by big Western governments like the United States.  But when a big company like Procter & Gamble or Booz & Co. speaks–on any topic–they are sometimes inclined to listen.”

Then I told them about my experience in Qatar (not quite two weeks ago!), where I appeared on a panel at the invitation of Ernst & Young.  The panel included Saif Alsowaidi, vice president of Qatar University, Uschi Schrieber, global director of government relations for Ernst & Young, and Muna Sulayman, a media personality and activist from Saudi Arabia.  This global firm, a well respected advisor to many corporate clients, held a conference in Doha, at which one of the panels was aimed at the question:  “How can we empower our women?” 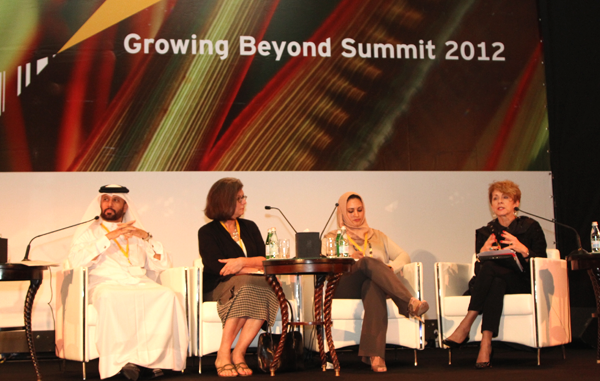 The room was full of people from the Middle East and North Africa.  There were a few women, but mostly men were present.  I was, as I reported in an earlier blog, a little nervous about talking on this topic in a roomful of mostly Muslim, possibly very conservative, men.  This region does, after all, have the highest measures of gender inequality in the world.

But, instead of the tense moment I expected, the discussion was gracious and open, very dignified and sincere.  No one stormed out or became defensive.  It was as if, by Ernst & Young having set the stage, they had also made it “safe” to have a talk that, in other places and times, might have been adversarial (to say the least).  Simply having created a kind of canopy for conversation, in an environment that was clearly designed to be professional and impartial, Ernst & Young opened a window of time in which the men of the region could hear me, could hear the other members of the panel, and–just as important–where I could hear them, as humans, not as statistics or news stories.

And I used this example to illustrate my point for the students at Queen’s.  Rather than starting up an elaborate program to–I don’t know–train women to make fishing nets (not that such projects aren’t important), Ernst & Young exerted some “soft influence” simply by creating a space for a good talk.

I can think of other examples.  In an earlier blog, I reviewed the new Third Billion analysis by Booz & Co. and mentioned important reports and white papers coming from Goldman Sachs and McKinsey.  The report from Credit Suisse about women on boards is another important one. These reports help to frame the way the world thinks about the “women question.”  So it is extremely important what they say and how they say it.

However, it is just as important that firms of this stature are spending time on the topic and putting their opinions out there at all.  Especially in a business school environment, where the thinking can be conventional and the atmosphere charged with testosterone,  I have noticed that it makes a huge difference to be able to refer to these big names as having issued reports or white papers on this particular issue.  It puts the whole question on the map in people’s minds.  Maybe that is not right, but it is true.

And there are other, more informal and subtle ways of exerting soft influence.  My friend Nada Dugas, who handles external relations for Pampers at Procter & Gamble, works on the fabulously successful partnership with UNICEF to combat maternal/neonatal tetanus.  When I first heard about her, she was conducting a quiet study of her own in east Africa about the effect of having no sanitary pads on poor girls’ school attendance.

This is now a big public topic, debated in parliaments in Africa and supported by many NGOs.  But, back in the day, it was just Nada–no one else had thought about it.  Including me.  When a colleague of hers, to whom I was introduced at a cocktail party in New York, mentioned to me what Nada was working on, I immediately felt that this was something the world needed to notice.  My team went on to build a whole research program that helped bring global attention to this taboo topic.

When Nada is “on” for one of her formal programs, she is about as “soft” as gale force winds.  But when she travels the world, first for feminine care and now for babies, she sees “backstage” behaviors and talks to people about intimate problems.  She notices, remembers.  And then quietly makes an introduction here, a suggestion there.  In the wake of this soft influence, many good things can happen.

Companies are made up of individuals.  Setting a compassionate example, upholding a principle, expressing a supportive thought–all these are things that can be done to help women around the world.  Businesspeople, just like government actors and NGO representatives, can do much in these soft ways.

From left, Saif Alsowaidi, me, Uschi Schrieber, and Muna Sulayman.

My Most Impactful Project Goes Public on Tuesday

Are WOBs Getting Screwed in Procurement Post-COVID?

Why Do Women Need Their Own Kapital?